First mid-tech out the door!

The first mid-tech has left my shop!  This Little Rok went to a good customer who wanted to build his own Kydex sheath for it.  Good thing since I haven't gotten a chance to tweak on the sheath tooling yet (been working on forged stuff).

Here's a bad photo with me reflected in the oil on the blade: 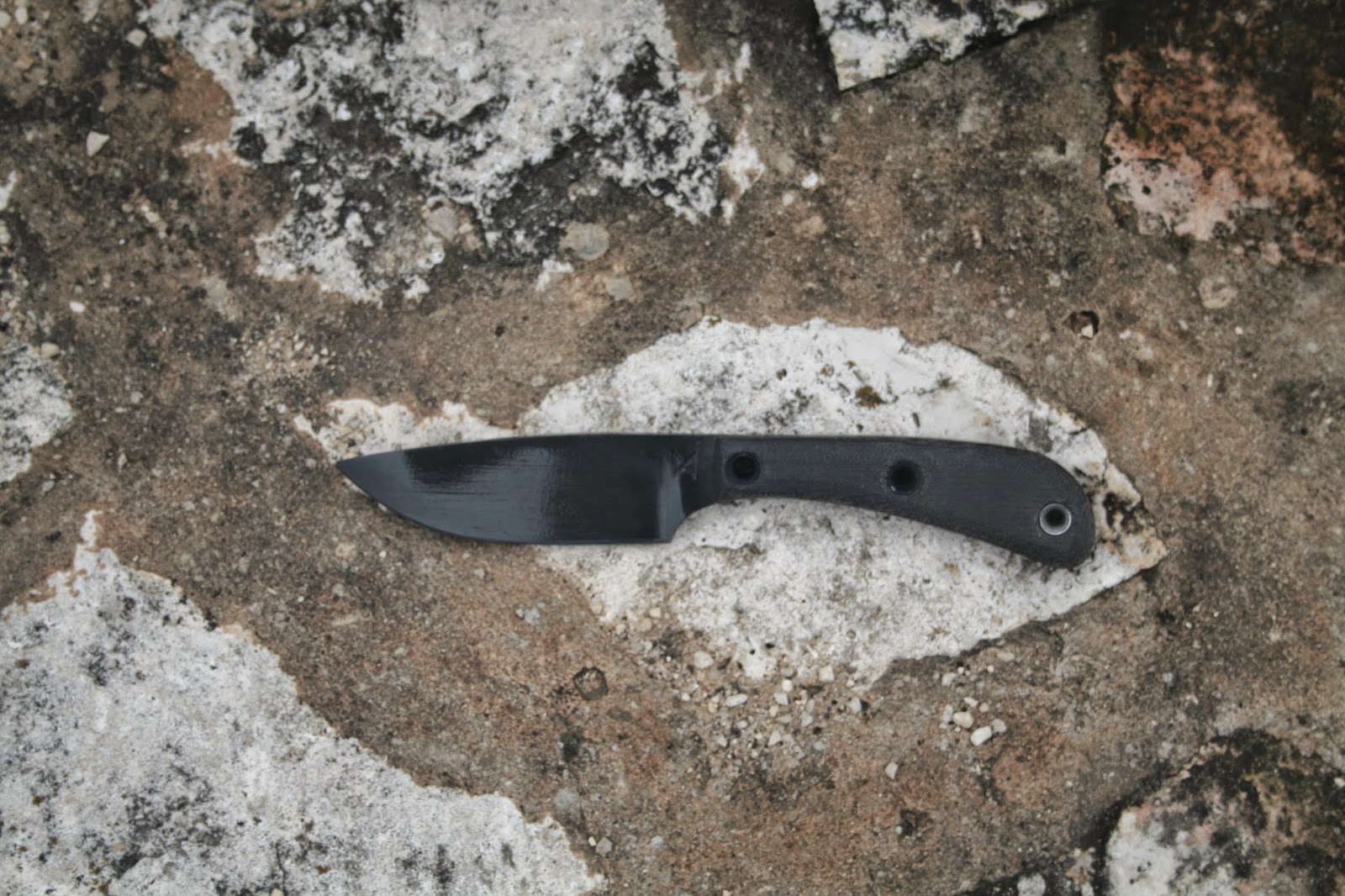 And a better one that he took, with another essential tool: 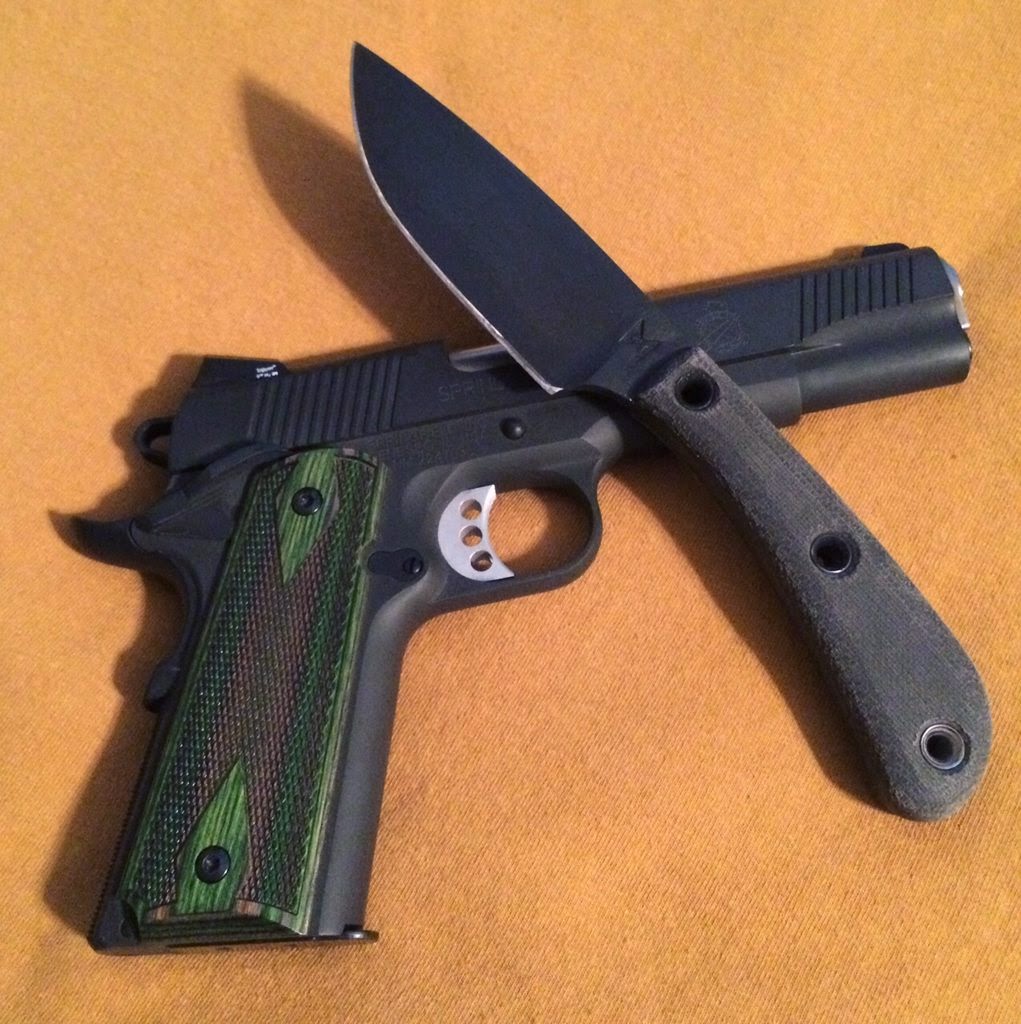 And what he has to say about it:

"I believe this is the first mid-tech model to leave James' shop.  This is the "Little Rok" model and it's just an amazing EDC type blade .  In addition, it will no doubt will accompany me on many outdoor adventures. I can't speak highly enough of the craftsmanship and the comfy ergonomics.  This is my 4th tool from James and I couldn't be happier."

Always glad to have happy (and repeat!) customers.  :)  Hope it serves well.
Posted by Helm Enterprises, Forging Division at 5:56 PM No comments:

Had a friend that lives on the other end of the state get to come visit for a while today.  He's short, lean, and wiry with years of FMA and ARMA training, while I'm tall and chunky with years of time spent chopping firewood and clearing brush.  His hand is 3/4 as wide as mine, and he grips them differently than I do, but he loved the feel of the handles, especially the Benghazi Warfighter and the mini-parang.  Since comfortable handles are something I strive for, I was pleased to see that.  He's planning on picking up a Benghazi Warfighter at some point in the future.  :)
Posted by Helm Enterprises, Forging Division at 9:14 PM No comments:

I've been working for a while on developing a line of mid-tech stock removal blades.  I don't usually post work until I'm done, but what the heck.  I'm pleased with how things are going.  :)  It's taken me a while because the approach in making these is so different from my usual forge finished blades, and I want to do them right.

Most of the lineup is based on designs that I have forged before, with a few brand-new.  They are intended to be straightforward working knives that will also serve equally well in a combat role.  Many of my customers are military and law enforcement, and that's who I had in mind while designing the lineup.

All of them are waterjet cut from 3/16" 80CrV2 steel, have tall flat grinds, and have black oxide finishes.  Three of the designs (only one seen today) are intended to have cord-wrapped handles or removable flat handle scales, while the rest get TeroTuf scales riveted with flared stainless steel tubing.  I'm also working on developing standardized tooling for molding Kydex sheaths for them.  While the basic design of the tooling seems good, there is still some tweaking needing done in execution.

All of these shave hair nicely.  :)

First off, what has become my new EDC, a Little Rok.  It's replacing one of my early forged Little Roks that I've carried for several years.  The new version is a much better knife; I've learned since I made that one.  It fits nicely in the tool pocket on the leg of my carpenter jeans. 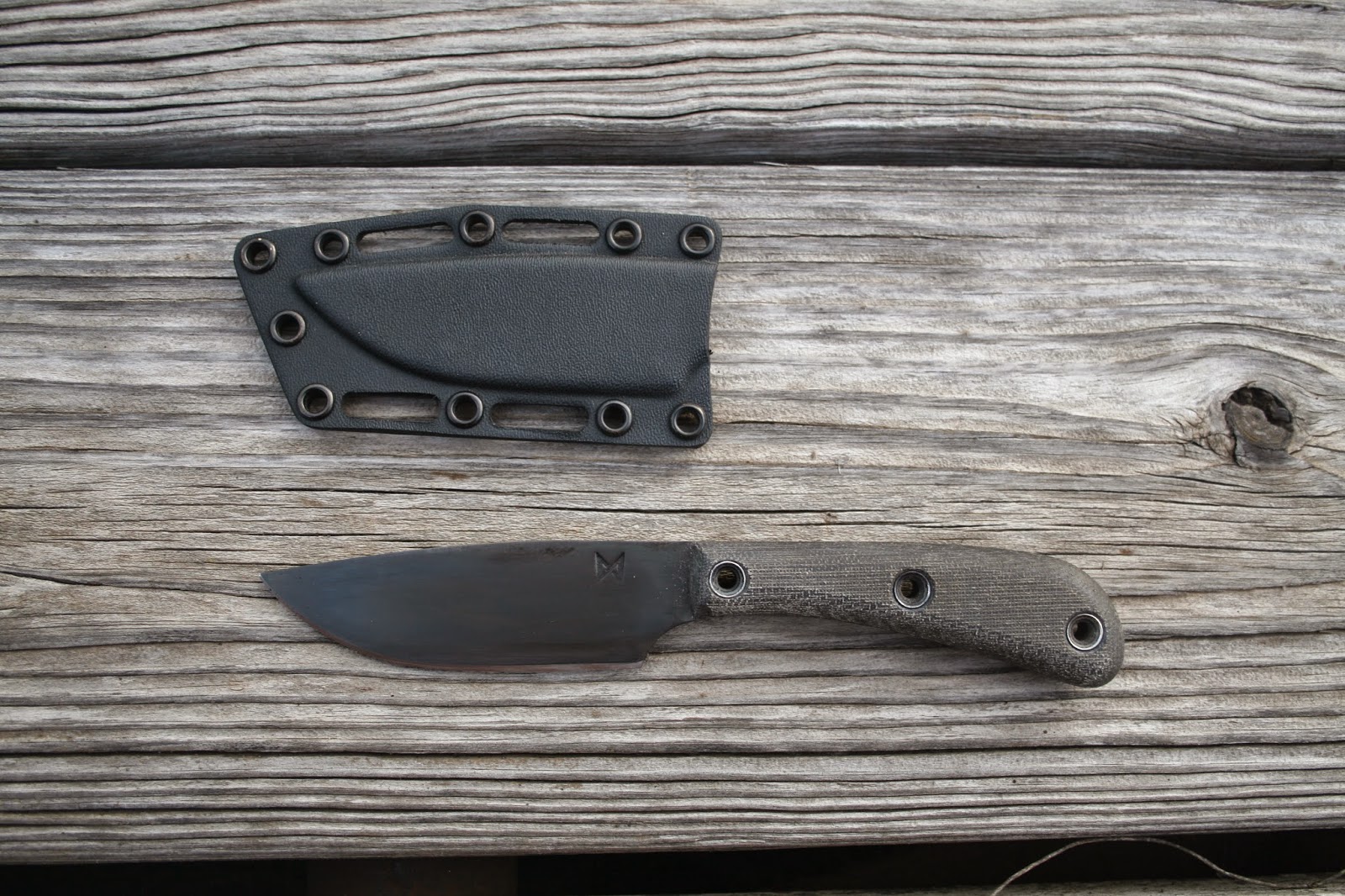 Next up, the design that I have had ordered the most, my Benghazi Warfighter.  There's definitely been evolution of the design since I made the first six in 2012 and donated them to some Marines, but it's entirely been refinement.  The basic design is pretty darn solid.  A decent number of warfighters in different branches of the service, veterans, and civvies are carrying the forged version of this, and using it for everything from processing deer and feral hogs to chopping down fair-sized hackberry trees. 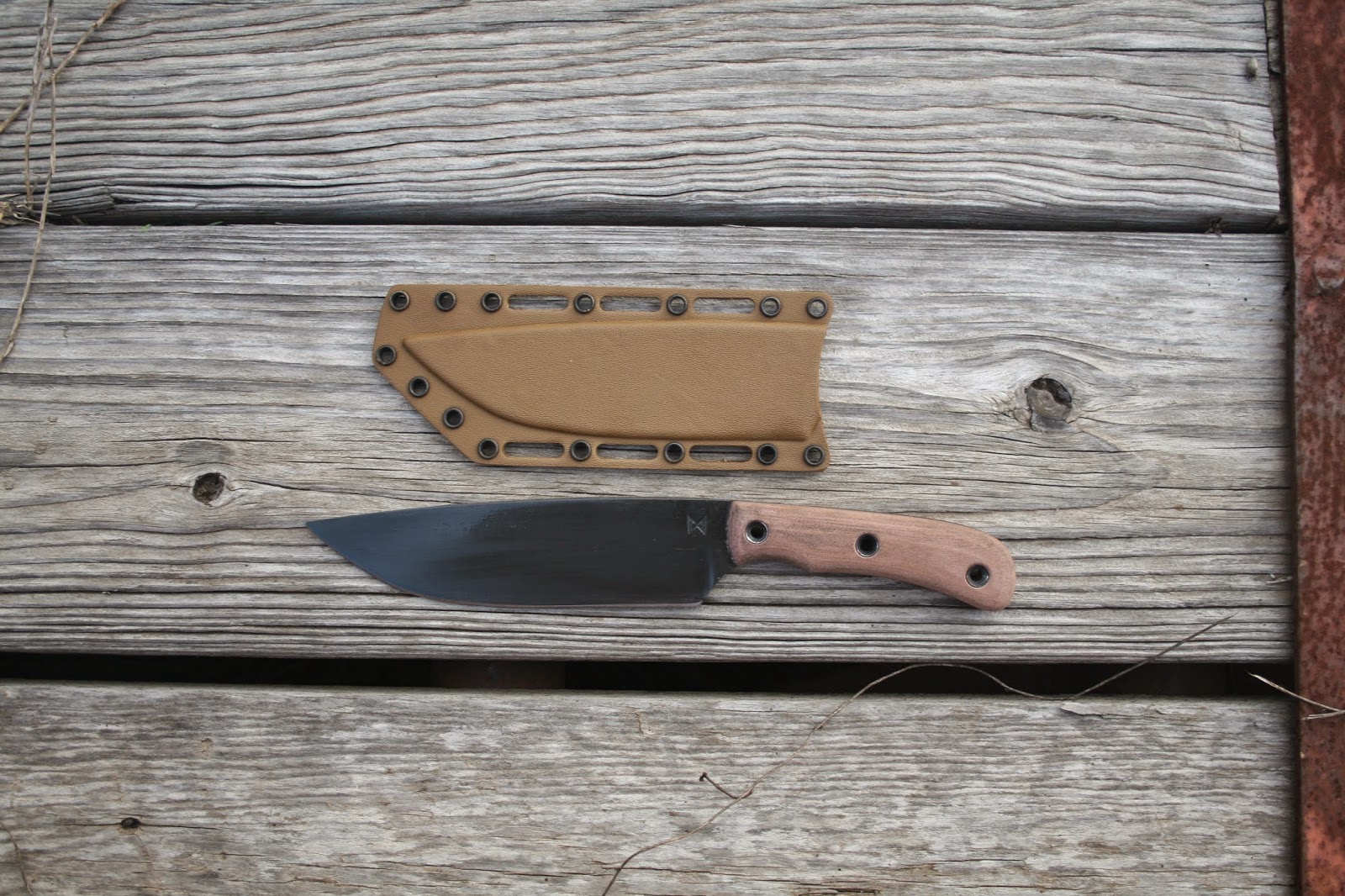 If you keep an eye on my work, you've seen this mini-parang design in forged form recently.  It was originally one that I forged, traced the blade outline, then turned it into a CAD file with the help of my waterjetter.  Then, a California drug enforcement agent wanted me to forge him a new one, and I used one of my waterjetted blanks as a pattern when forging out his.  And now I finally have a stock removal version ready to go.  One of those "circle of life" kind of things.  :D 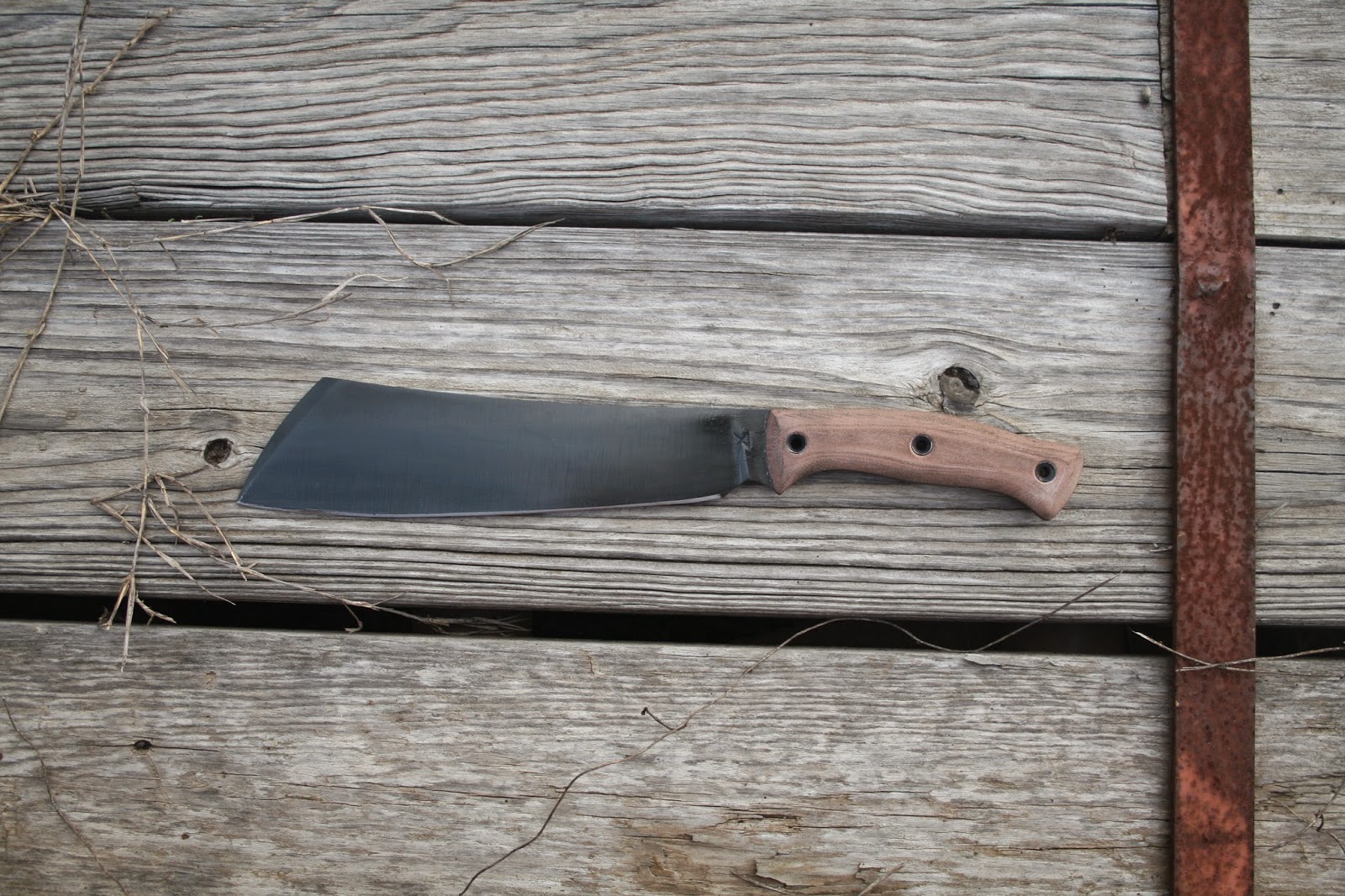 And finally, one of the new designs, a wharncliff.  You can see on this one that my stamped touchmark got ground away.  I wasn't thinking about that happening until after I was already stamping and normalizing.  I quickly got an electro-etcher kit.  Now to try it out and get that process down too. 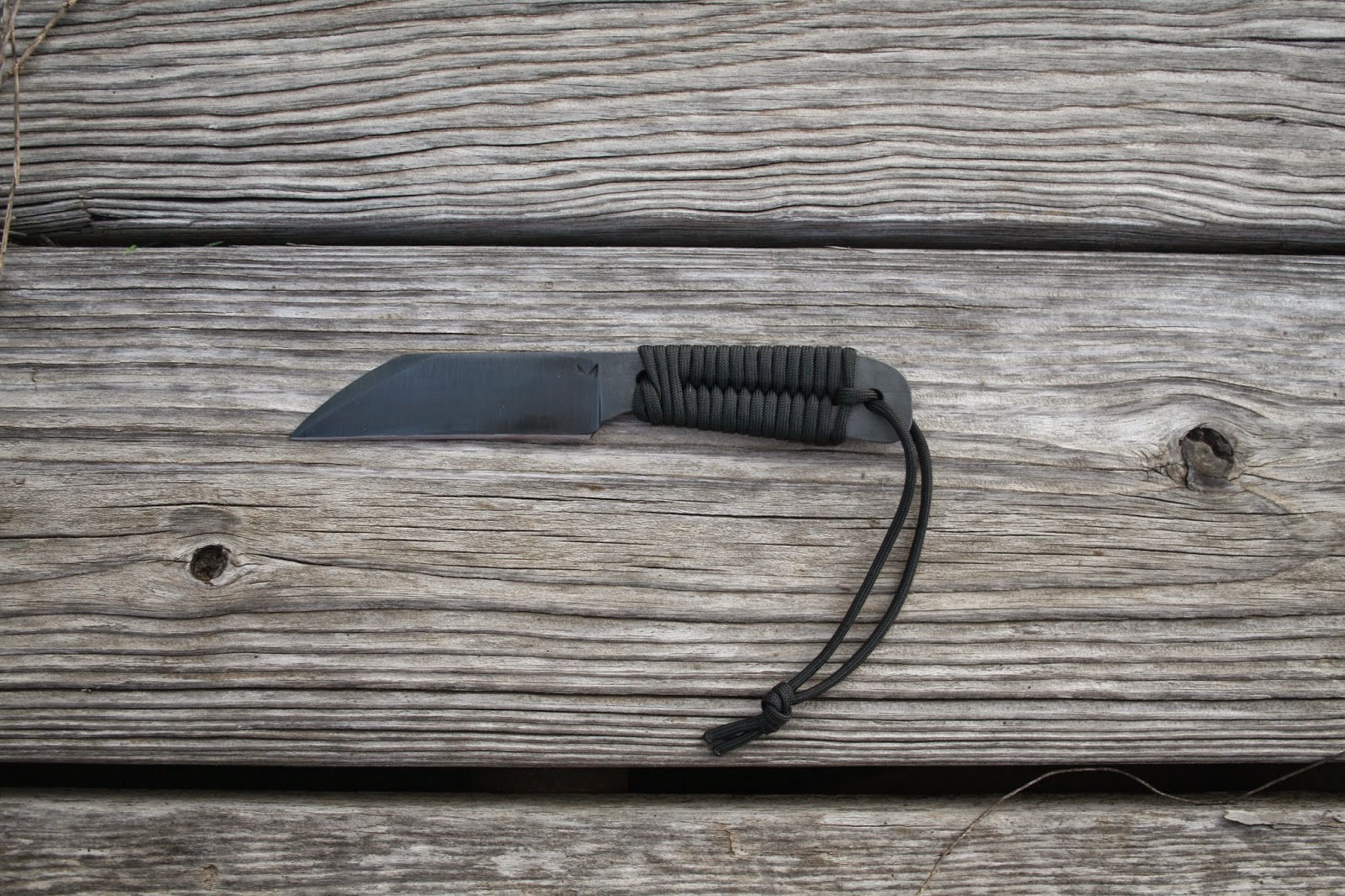 By hook or by crook I intend to have at least some of the new lineup on my table at the Blade Show come June.  Don't know that the full lineup will be ready by then, but hopefully most of it.  And, of course, tomahawks and forged work.
Posted by Helm Enterprises, Forging Division at 10:23 PM 1 comment: