Edit 06/15/2019 - There have been a number of changes made to the tomahawks.  Most prominently, the steel alloy has been changed from 1/4" thick 4140 to 1/4" thick 80CrV2, an alloy I've used extensively for my other blades for several years now.  The tangs have been slightly widened, the coating changed to Cerakote ceramic gun coating, and texture added to the handle slabs. I am dropping the War Chief (combat spike) from my lineup although it was the first of my designs.  It is functionally matched by the Wrecker.  Hopefully I will soon be able to bring some new prototype designs into production and add them to the lineup.

There are two different basic designs of tomahawk, each available in three different lengths and two different color schemes.  There is the Woodsman (hammer poll), and Wrecker (pry spike).

The pry spike of the Wrecker is formed by two lines meeting to make a point.  It is intended to slip into narrow gaps and then lever out.  In conjunction with the rounded top of the 'hawk's head, it acts like a roller head pry bar with an ax blade on the other side.  The spike is angled in relation to the handle to give good knuckle clearance when prying (one of the alterations made during the prototyping phase).  It's also a vicious weapon and withdraws easily to allow for follow up shots. 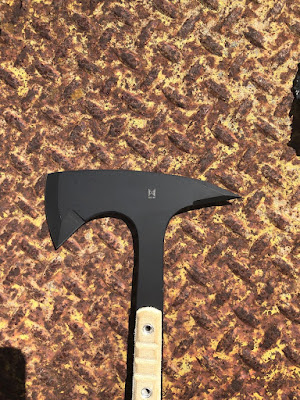 Aside from utilitarian tasks, the Woodsman's hammer poll makes a great impact weapon, and the slight hook on the bottom of the poll helps during CQC in catching and re-directing limbs.
﻿ 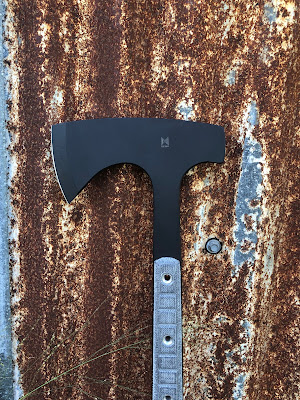 The butt of the tang is exposed, giving an extra hammering surface and protecting the end of the TeroTuf from damage in impact (say if you throw it, which I strongly advise against).  The handle widens as it approaches the end and has a swell in width to aid in retention in the hand while swinging.  Throwing tomahawks have handles that are the opposite, tapering to the end in order to easily slip out of the hand when thrown.  I consider it more important to keep the tomahawk in your hand during usage, especially if it must be employed in the heat of close quarters combat, than to be able to throw it. 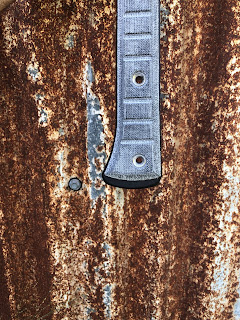 The steel of the tomahawks is 80CrV2, a very tough alloy.  I've used it extensively to forge blades over the past several years.  It performs very well from a simple heat treatment, and I do my own heat treatment in-house.  After the blanks are cut by waterjet they are ground, hardened, and tempered to the point where they will hold an edge chopping hardwood all day, yet not take undue damage if used for more abusive tasks like cutting into a car.  The bevels are also ground with that in mind, able to cut well while still being stout enough to handle more brutal service without failing.

The handle slabs are 1/4" thick TeroTuf, a composite material made of resin-impregnated layers of cloth.  It's very durable, lightweight, grippy, and impervious to most chemicals.  The slabs are attached with flared stainless steel tube rivets, which are extremely strong and allow attachment points for lanyards, cord wraps, etc.  I no longer use Micarta as I find the TeroTuf lighter, grippier, and tougher.

The coating on the steel is Cerakote ceramic firearm coating.  While protective, it will wear during usage. 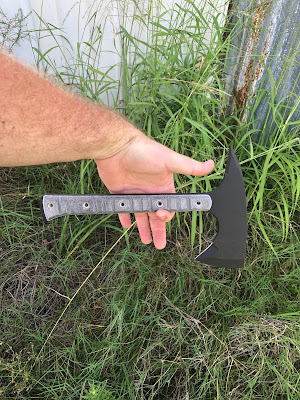 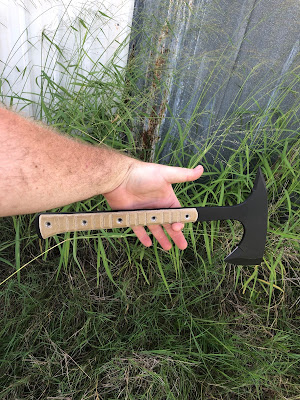 Either of the tomahawk designs can be ordered with the inner beard either sharpened or unsharpened.  This adds to its fighting effectiveness, especially when hooking extremities.  However, it can make it a little more dangerous to handle, and certainly adds to the aggressive looks.  If its usages are going to be more benign and around people who may look askance at anything they perceive as a weapon, the unsharpened beard may be a better choice.  I have had a customer use his sharpened inner beard to cut branches and vines while hooking them, but it is more intended for folks who may have to use it in a fight as a last-ditch CQC weapon.

The tomahawks can be had in either black or desert tan color schemes.

The sheaths are bottom-eject, ambidextrous, with multiple carry options.  They are molded from Boltaron, a material similar to Kydex but less vulnerable to temperature extremes.  It is common with professional pistol holster makers.  Sheaths come standard with a single retention strap. 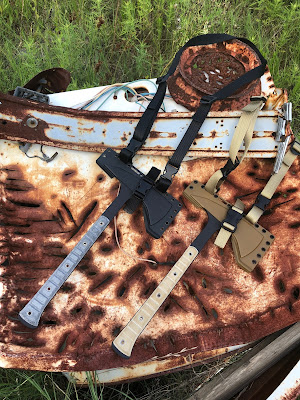 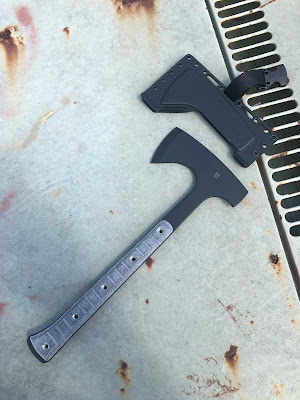