I'm still in the process of getting the ball rolling on everything, but the first product from Helm Enterprises, Grinding Division and what started the whole shebang is my line of tactical tomahawks.

These have been something I've wanted to make for a long time, longer than the existence of Helm Enterprises, Forging Division. I had planned to build a relatively traditional forged tomahawk with a punched eye, using some form of synthetic material for the handle since I didn't trust wood with a warfighter's life.  I've spent a lot of time clearing brush, and no other material has felt better than a good hickory handle.  However, I've also spent too much of my life replacing broken wooden handles (and had new wooden handles that broke literally on the second swing after replacing the old one) to trust it on a modern battlefield.  I worked on developing processes and tooling and figuring out materials needed, then began building prototypes. 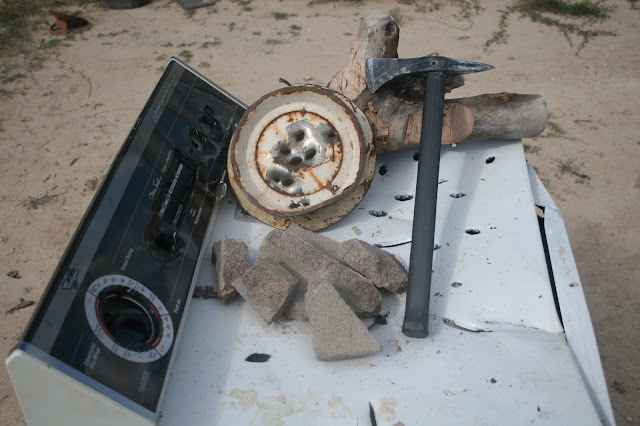 The prototypes worked as well as I could ever ask for in most regards.  The heads were very tough, withstanding abuse while still cutting well (which is the primary use for a cutting tool, right?) and the handles felt great while withstanding more force than a comparable hickory handle.  Then one of the prototype handles broke.  This happened after extensive abuse and then occurred at the end of a pre-existent crack that came from me driving the wedge that held the handle to the head in too deeply.  Even so, that raised a very large question mark in my mind.  Adding to that was the fact that a major usage of modern tomahawks is prying, used in breaching and other activities where a minimum of hand tools are available, making the tomahawk essentially a wrecking bar or multitool that you could also fight with.  The handles, while they felt as good as hickory when chopping, flexed too much when prying to be effective in that regard.

So while reassessing the handles and trying to figure out how to address these issues, a good customer of mine, a Navy SEAL, came along and told me he needed a full tang tomahawk.  That's a stock removal project moreso than a forging one, and to do one is less efficient than doing a batch.  Also, it would solve the flex and breakage questions on the handle.  So I decided to completely shift direction on the project and make it a stock removal one.  That led to lining up material suppliers, finding a waterjetter, figuring out how I was going to build CAD files, etc.  I took my original design with its planned options of multiple lengths, combat spike, pry spike, or hammer poll, and sharpened or unsharpened inner beard and adapted it to the new processes I would be using.

After building a set of prototypes and adjusting as needed... 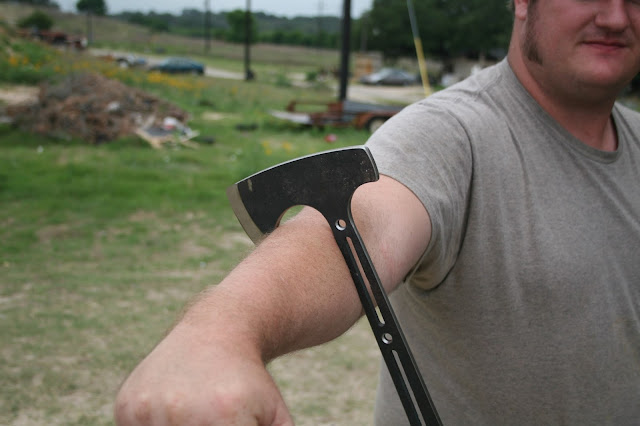 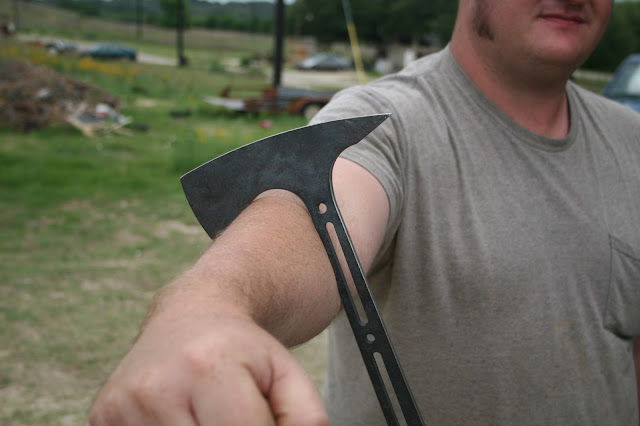 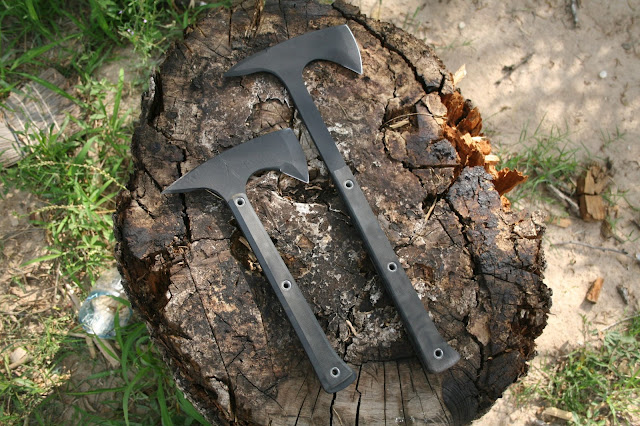 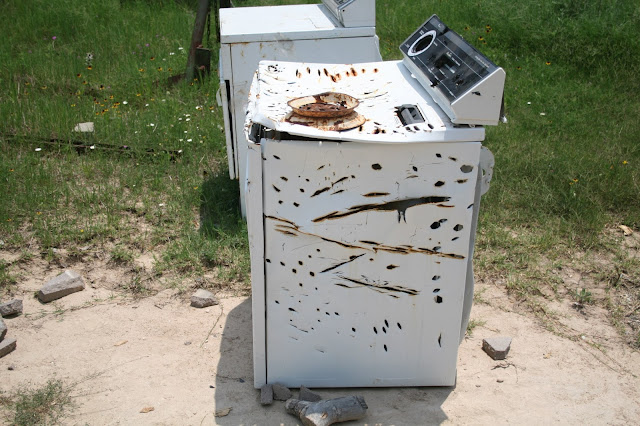 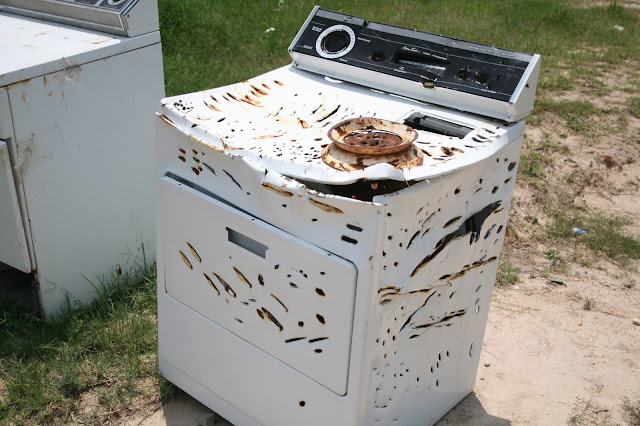 Satisfied with the results, I finalized my CAD files, ordered material, and had blanks cut out. 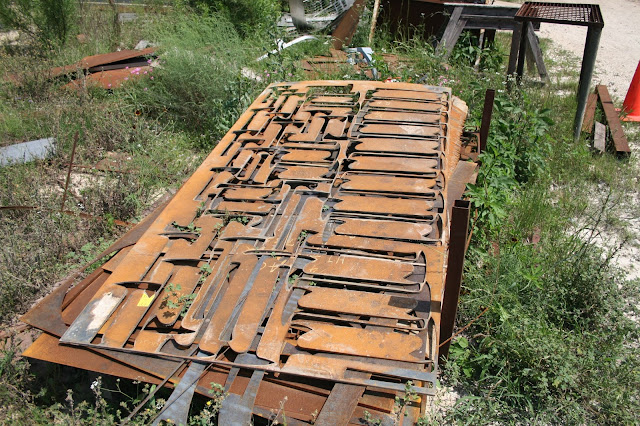 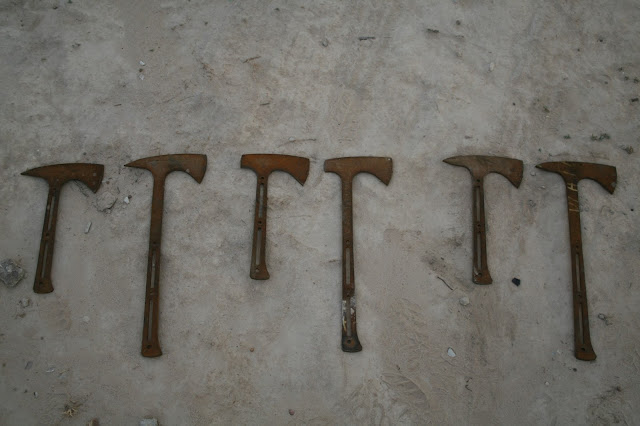 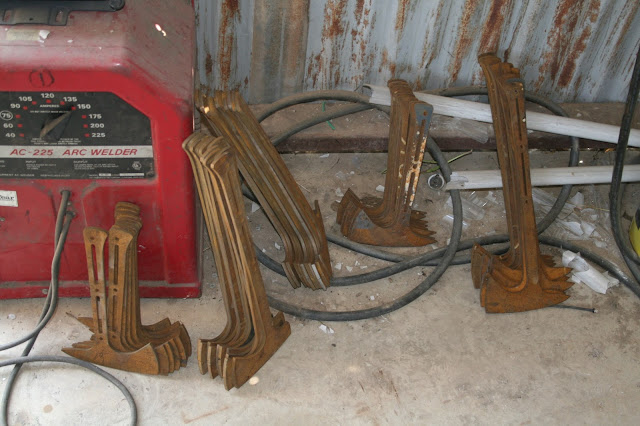 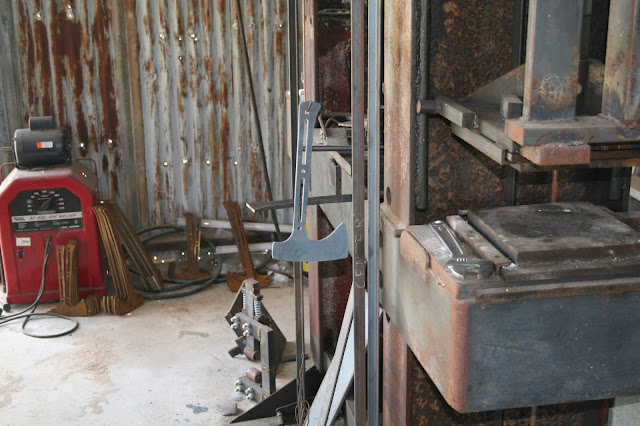 I finished up my first batch of one of each length and poll/spike and got them ready in time to debut at the 2013 Blade Show in Atlanta, Georgia. 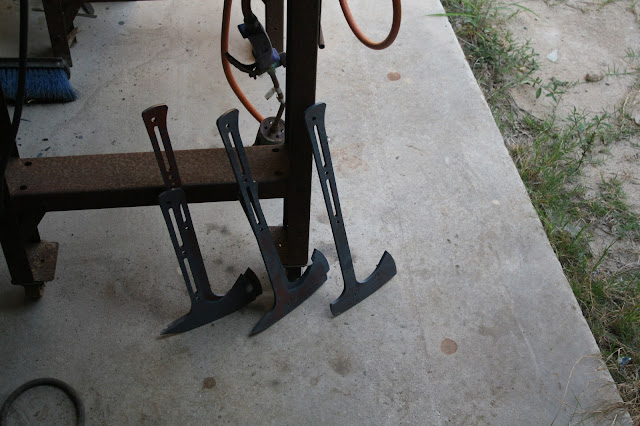 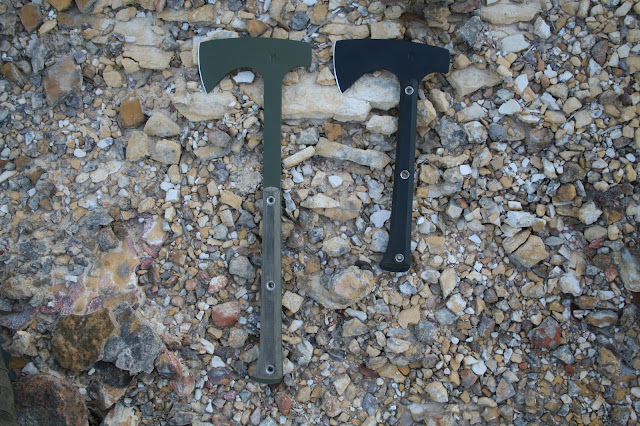 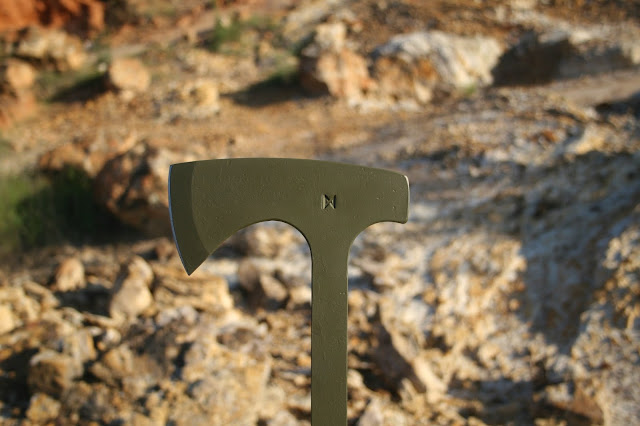 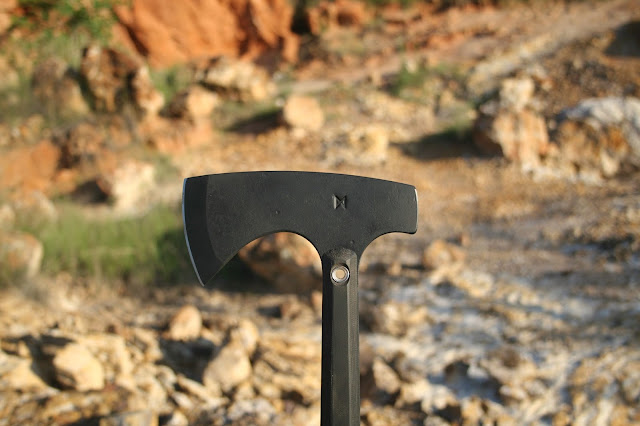 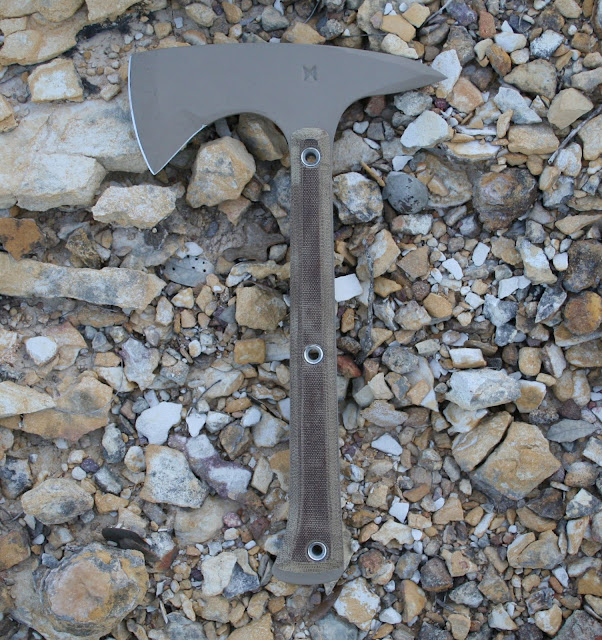 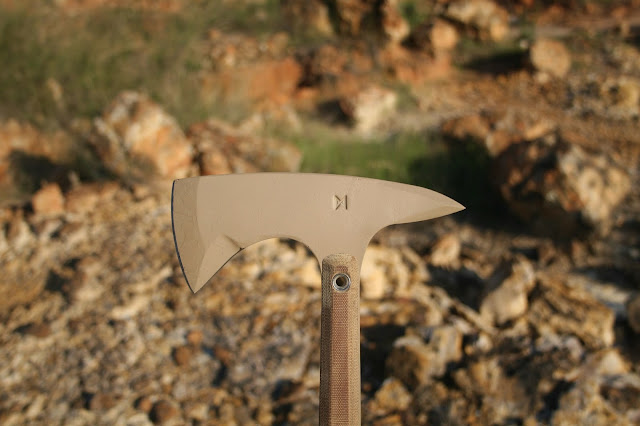 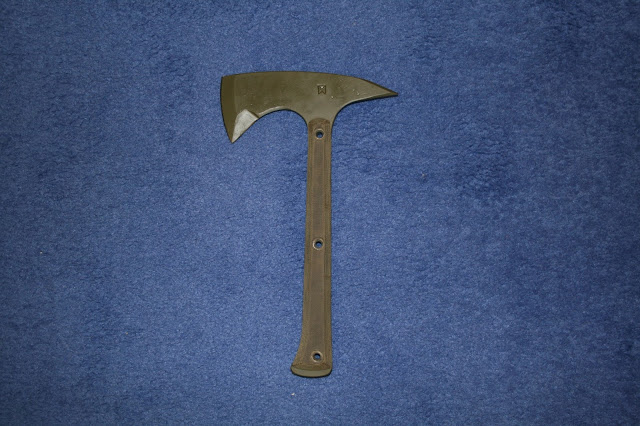 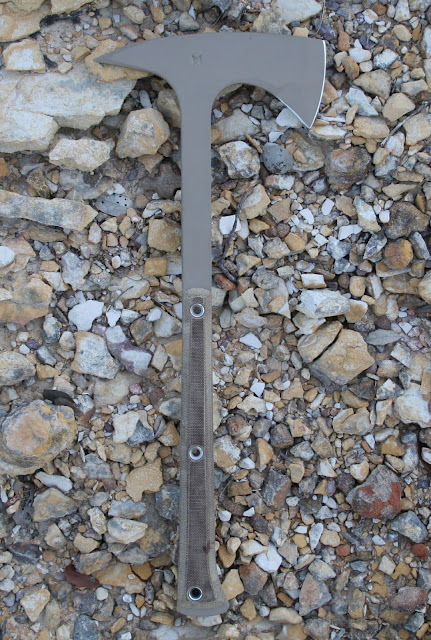 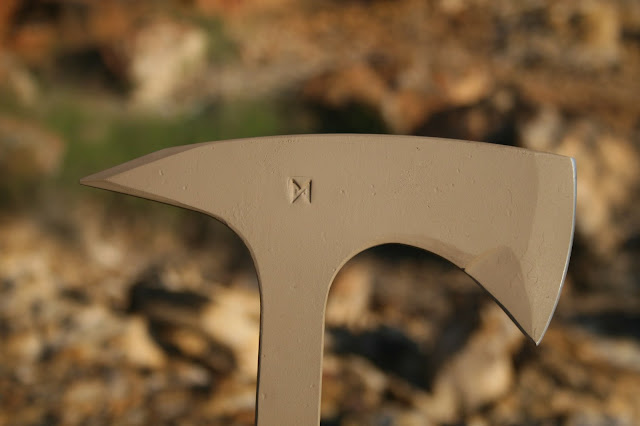 While I am currently still working on upgrading tooling and processes to streamline building 'hawks, I will be making more of them soon.  The first few customers who have gotten them have given me good feedback and are very happy with their purchases so far.
Posted by Helm Enterprises, Forging Division at 5:11 PM